She stabbed me. She stuck a knife in my chest, just lightly enough not to kill me but with such precision that would leave me bleeding on our cold lacy sheets. There I laid helplessly gasping for air, praying for myself to pass out in order to escape the immense pain. I wasn't that lucky, however. With each throb of my pulsating heart, more blood would spew out, ultimately leaving behind a grotesque coming-together of both pure white and striking red.

Well, to be honest, what she really did was tell me she’s been seeing someone else. I know, gruesome, right? That's exactly why I chose to start it off lightly so I wouldn't scare you off right off the bat. Because one who loses the love of his life knows that there's nothing in the physical realm that even comes close. Not even being tied down and tickled ferociously with a feather. Not even that.

Seriously, though, the bomb that she dropped on me truly hit hard. It was more like a nuke than a grenade, really, if I'm being honest with you. It just blew my mind – to smitherines. Only I didn’t really bleed – I don't think bombs make you bleed, do they? – but I did cry almost long enough for my eyes to bleed. I actually cried harder than I’d ever cried in my life. Hard as a rock – a diamond, even.

After sadness came anger. How could that no-good bitch do that to me? After all I'd given for her she'd gone to another man for good ol' loving and tenderness. I mean, hell, I had my own fair share of sex outside of our marriage, but it's not like I blurted it out to her. I say if you do some stupid shit on your spare time, then fine, that's your life, but when you start sharing stuff like that with your spouse... That is where I draw the line. That is when it becomes offensive.

What came after anger, you ask? Well, I think it kind of kept shifting back and forth between anger and sadness as I was still laying there in our bed. It was like a legitimate rollercoaster ride of emotion where I just shut my eyes and went wherever my feelings dragger me to. And man, there were some twists and turns and loops and corkscrews and all that shit you would normally find on a really great rollercoaster, except that the experience for me wasn't great at all. It was more like one of those rides where the security paddings or whatever push down on your bladder hard enough for you to believe you'll pee your pants. Then, of course, before you know it you're up in the air spinning around afraid of becoming a fucking human sprinkler of urine. Now that's a rollercoaster ride I would have preferred not to experience! Yet I did.

They say a person's body cannot deal with full-blown anxiety for more than two hours at a time. This I can testify to, as I did feel my anguish gradually subside. In the end, I just stood there with my eyes dry and my throat hoarse from all the weeping. Suddenly, what I felt was peace. For a moment I'd felt like I was going to die – and, emotionally, I'm pretty sure I must have come close –, but then a bizarre thought just came to me: What if I don't care? What if just stop giving a rat's behind about the thing that happened. I mean, sure, of course being cheated on sucks, but what if I just give into that suction? What if I just stop fighting what's already happened and, you know, just live with it. Like here I am wrapping my brain around this subject that's all touchy-touchy, although I could just give up and let it be. Indeed, that is the old Beatles classic coming back to haunt me and it's certainly not only speaking words of wisdom – it's fucking shouting!

Screw it. That's what I said, but not in an aggressive manner. I said it with full acceptance of what is. Why fight what's already there? During my stint with unfathomable pain, I'd learned how to distance myself from my ride of emotions better. No longer was I just an obedient slave to my thoughts and feelings, I was more the slave master, although benevolent and humane at that. Like a pilot of my own damn airplane, I was in control. Deep within I knew I could survive whatever obstacle, and why wouldn't I? I'd already survived a knife, a nuke and of course – being a human sprinkler of urine. How could anything ever phase me anymore? 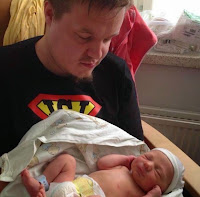